We are privileged to observe many success stories with significant improvement in our patients’ health through our specialities in Chiropractic Structural Rehabilitation. Hereby, we are delighted to share a few cases with you. 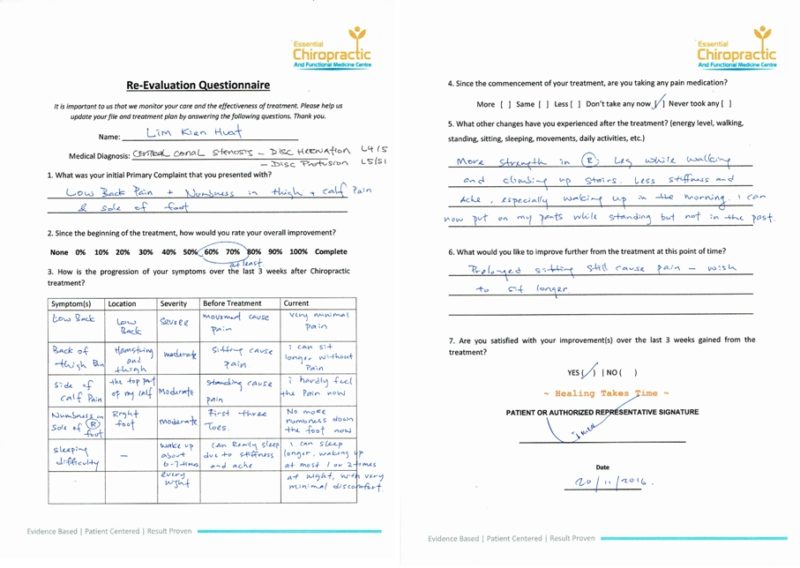 Mr. Lim visited our centre after being introduced by his brother. He was limping with every steps he took when I first met him. It was a case of “slipped disc” with the involvement of nerve impingement.

His MRI report shows large disc herniation at L4/5 level with narrowing of the spinal canal. Also, a disc protusion at L5/S1 touching on S1 nerve root. His hope was to recover from his symptoms and avoid spinal surgery, which was suggested to him as the only option by an Orthopaedic Surgeon. We disagree that and accepted the case and treated him for a month.

Treatment includes chiropractic spinal manipulation, spinal traction, TENS, and other manual therapy approach. Of course, he was also very diligent in completing his postural exercises, and following our suggested treatment protocol. His progress is illustrated as here for your reference. We wish to educate that spinal surgery is often not the only option for “slipped disc”, and conservative spinal rehabilitation is as effective if not more to alleviate the signs and symptoms.

Most importantly, you don’t have to go under the knife.

To find out more about the details, the case report is as below: 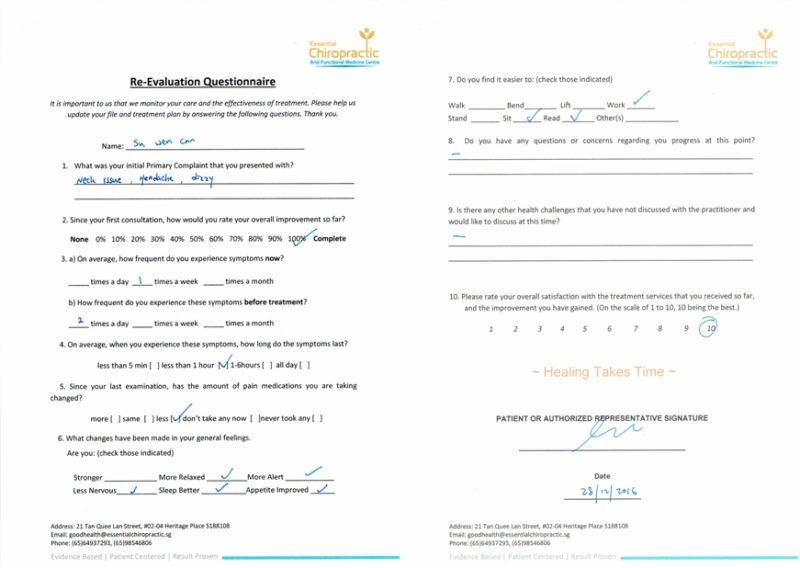 WenCan has previously experienced frequent headache and neck pain for many months. She have tried various treatment method like pain medication, muscle relaxants, Chinese Medicine and Tui Na. To make things worse, she started to experience dizziness in August 2016.

She was referred to our centre by a friend of hers. Thorough examinations revealed abnormal motion in her neck and further X-rays analysis showed a complete reversal of her neck spine (Cervical Kyphosis).

WenCan underwent Corrective Chiropractic Care (Chiropractic BioPhysics) with us. After 1 month of treatment, her condition was re-evaluated and showed significant improvement. She barely experience any headache and have not experience any dizziness.

With this, we wish to educate that neck alignment is closely related to symptoms include but not limited to dizziness, headache, migraine, neck pain and insomnia. 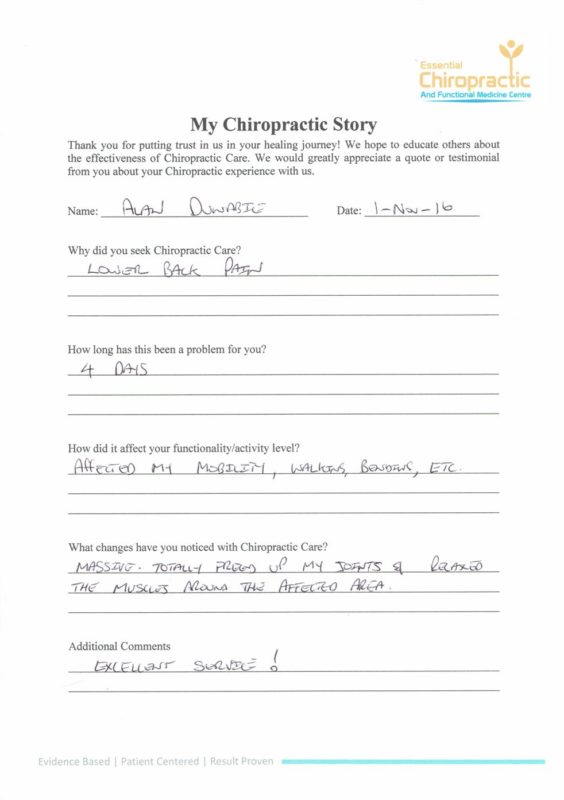 Alan Dunabie was in deep acute pain when I first met him. He supposed to return home (Switzerland) that evening. Unfortunately, acute low back pain has restrained him from doing so.

He wasn’t able to walk for more than 20 minutes for the past three days. Pain medications and tiger balm only reduced his discomfort minimally.

Chiropractic Spinal Adjustment and Soft Tissue Therapy was performed for two consecutive days.With that being done, he was sent home pain-free!

With this, we would like to educate that Chiropractic Spinal Adjustment is very effective in treating mechanical low back pain! 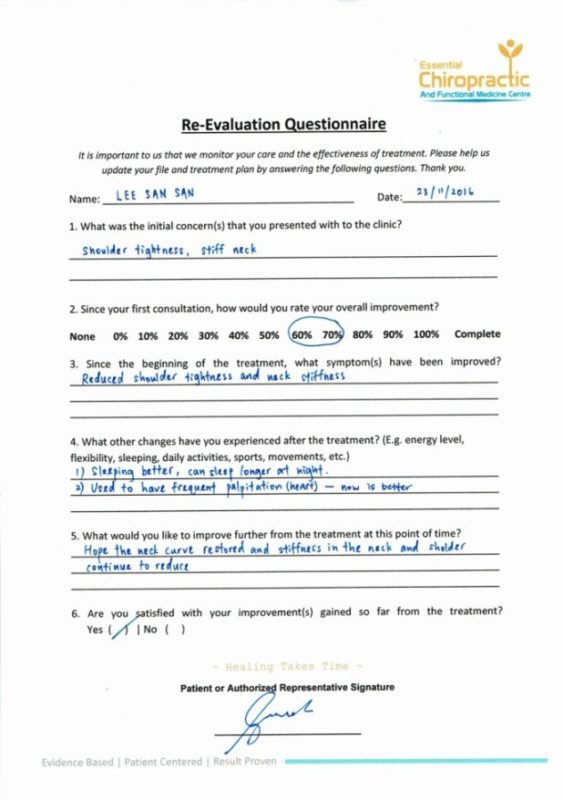 San San was referred by her husband, an existing patient in our centre. Her neck movement was reduced with rigidity. X-rays revealed a forward translation of the entire neck spine. (Forward Head Posture).

After a series of Chiropractic Spinal Manipulation and Spinal Corrective Traction, she began to experience less stiffness in both neck and shoulder. Interestingly, a reduction in heart palpitation was also reported.

It is important to keep your neck alignment as ideal as possible because within the spinal column is your delicate spinal cord that has branches of nerve to various part of your body. Spinal misalignment may affect this nerve flow and thereby producing signs and symptoms. 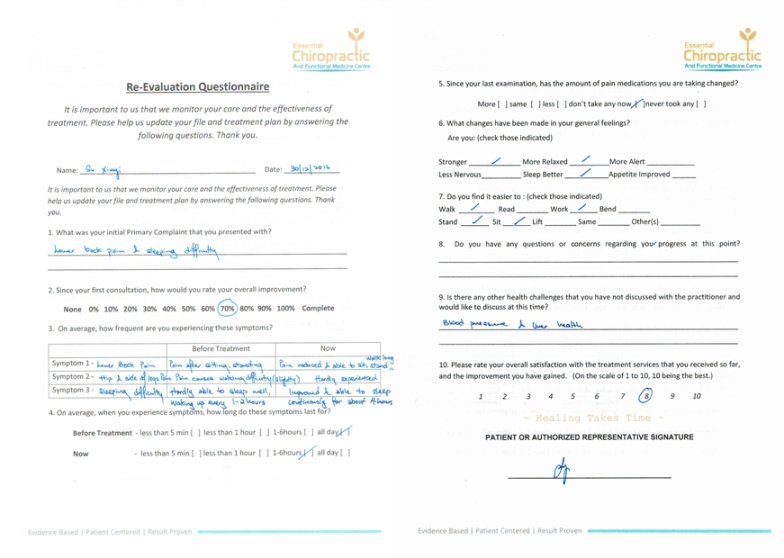 Low Back Pain and Insomnia

Chronic Low Back Pain and Insomnia

Many Chronic Low Back Pain sufferers have abnormal lumbar curvature. Xinyi is one of them. Her low back pain prevents her from prolonged sitting and having a good sleep at night.

Xinyi experienced an acute exacerbation of her chronic low back pain when she came in to see us. Sharp pain at the lower spine and aches around the gluteal region were causing extreme discomfort.

We have successfully reduced her low back pain after about  8 treatment sessions. With that, she has experienced better lower  back movements and her sleep was improved.