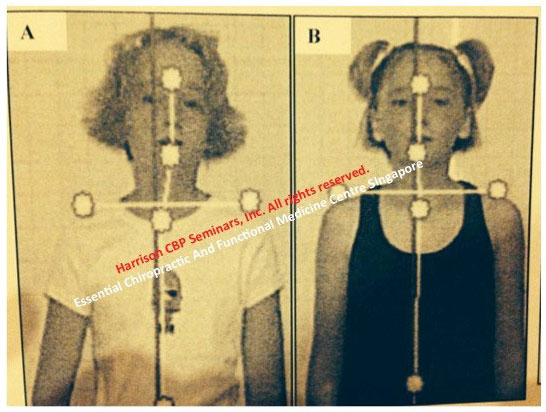 Children Get Pain and Aches Too

This is a 10 years old female who presented to a CBP practitioner’s clinic for treatment of neck pain, headaches, and upper back pain. The patient stated that her pains began 1-month prior after a trampoline injury. Prior to examination, the patient had 6 visits at a separate Chiropractic Clinic, which did not alleviate her pain. On examination, the patient VAS was 7/10, and was described as moderate. On NDI, the patient scored a 27%. Figures below depict her resting standing posture from the front view before and after 8 weeks of CBP protocol treatment. The symptoms were improved with VAS 1/10, and NDI of 9%.

This is a 25 years old female who presented to a CBP practitioner’s clinic for treatment of neck pain and migraine type headaches. On a VAS, she rated headache as 7/10, and the NDI score was 26%. The patient went through a 10 weeks CBP protocol of care with cervical traction and the symptoms of headache were reported to be less frequent and less intense. The VAS score was 1/10, and NDI was 16%. Note in the figure below, A was the initial lateral view x-ray with complete straightening of the cervical curve, and B was the result after 10 weeks of treatment. Note there was only slight improvement in the structure even the symptoms of headache had reduced. Patient was encouraged and decided to continue for another block of structural neck rehabilitation, and the result was depict in Figure C. The VAS for her headache is now 0 and NDI was also 0 at the end of the treatment. This case documents that some cases, regardless of age, need more than a 10-12 week program in order to achieve optimum correction and function. No definite conclusion on the structural changes should be made after only 1 block of 10-12 week of structural rehabilitation.

Age should not stop you from living a healthy life 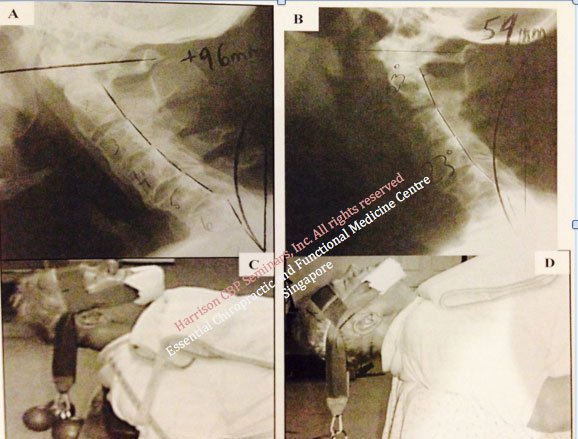 This is a 69 years old male who presented to a CBP practitioner’s clinic for treatment of neck pain, and some other serious complication of the cervical spine.

He has had several other forms of chiropractic care but symptoms were worsening. He went through a very intensive structural program shown in the figure below. Note how stiff the neck was in the beginning and the improvement in the second picture while doing the traction. Again, this is a case emphasizing the importance of cervical lordosis (neck curve).

Complete Re-alignment is NOT impossible

Schedule a 1-on-1
Consultation Today

Take Downtown/East-West Line to Bugis Station, then exit through Exit D to Tan Quee Lan Street. This exit is directly opposite of the Heritage Place .